Benzonitrile, a liquid with the smell of bitter almond volatile oil. It is miscible with ethanol and ether, soluble in acetone and benzene, and 1g is soluble in 100ml water at 100 ℃. Benzonitrile has a wide range of applications. Its biggest use is that the benzomelamine produced by its reaction with dicyandiamide can be used in metal coatings, plastics, fluorescent pigments, molding materials, etc. Benzonitrile can also be used as a high boiling point solvent for organic synthesis, paint, printing ink and resin, as well as as an additive for jet engine fuel and synthetic fiber combustion promoter. The market demand is increasing year by year. The reactions involved are mainly cyano reactions:

According to foreign information, Japan was the first country to industrialize the ammoxidation of toluene to produce aromatic nitriles. In 1963, based on the self-developed catalyst and fluidized bed reaction process, Nippon Chemical Industry Company adopted the ammoxidation of 2,6-dichlorotoluene to produce 2,6-dichlorobenzonitrile. In 1969, Japan Catalyst Chemical Industry Company adopted the ammoxidation of mixed aromatic hydrocarbons to produce phthalonitrile and benzonitrile. In 1970, Showa Electric (SDK) of Japan and Diamond Shamrock of the United States used SDK ammoxidation technology to produce m-phthalonitrile in Yokohama, Japan. In order to make full use of m-xylene resources, Mitsubishi Gas Chemical Company of Japan cooperated with Bagder Company of the United States to produce m-phthalonitrile using fluidized bed process with fine particle catalyst. During this period, Tokyo Organic Company of Japan also adopted the industrial production method of 3-methylpyridine ammoxidation to produce 3-cyanopyridine. Since then, the ammoxidation technology of aromatic hydrocarbons has been widely used in the synthesis of fine chemicals such as aromatic nitriles, and has become the main method for manufacturing aromatic nitriles. 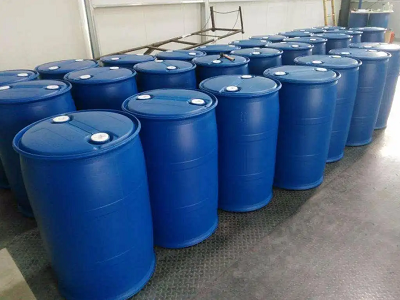 Toluene and liquid ammonia are heated, gasified, mixed, and then sent into the fluidized bed reactor to contact with the hot air, and react under the action of fine particle catalyst BN-98. The flow of toluene is 90-110l/h, the flow of liquid ammonia is 60-80m3/h, the flow of air is 300-500m3/h, the reaction temperature is 410-420 ℃, the catalyst load is 37-45g toluene/l catalyst · h, the material preheating temperature is 190-200 ℃, the material gas pressure into the reactor is 0.03-0.05MPa, and continuous production is adopted;

The temperature of the product gas flowing out of the fluidized bed reactor can reach about 300 ℃. The air can be preheated by heat exchange to save energy, and then it can enter the capture tower and absorption tower for spray cooling. The liquid phase benzonitrile and water are condensed. The upper benzonitrile flows into the separator through overflow to separate the crude benzonitrile. The production wastewater separated from the lower layer can be used as the set spray water of the capture tower and absorption tower for recycling, Save water resources;

The crude benzonitrile separated is sent into a distillation kettle for vacuum distillation. The pressure is 0.090-0.092MPa, and the heating temperature is 138-144 ℃. The pure benzonitrile product with a content of 99.6-99.8% is obtained.